The IN2P3 is responsible for the national animation and coordination of activities in nuclear physics, particle physics and astroparticle physics as well as the development of related technologies and applications, especially for health and energy. The goal of such research is to explore particle physics and atomic cores and the basic interactions and connections between the infinitely small and the infinitely large. The IN2P3 Computing Centre supports research in all of these disciplines by providing IT services and resources. This includes several flagship international experiments supported by the CC-IN2P3.

The goal of particle or subatomic physics is to study the constituents of matter and how they interact. This science is also known sometimes as high-energy physics because many elemental constituents are unstable and do not exist in a natural state, meaning they can only be detected during high-energy collisions between stable particles in particle accelerators. The deployed energies correspond to the very first moments of the universe, fractions of seconds after the Big Bang. 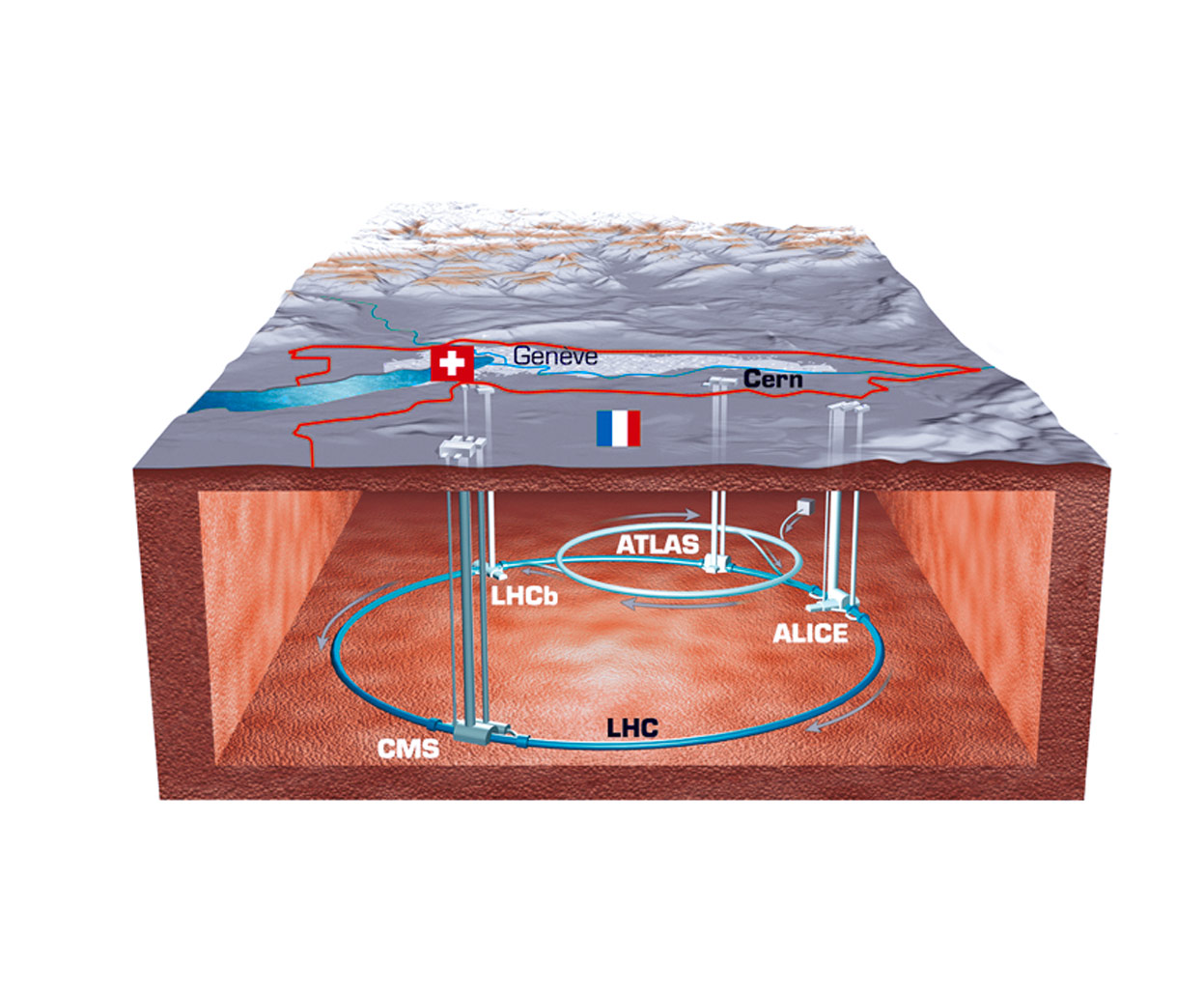 Based in CERN near Geneva, the LHC (Large Hadron Collider) can perform collisions of very high-energy particles. The energy released during these collisions is materialised in particles that are analysed (counted, identified and measured in terms of energy intensity, etc.) so that current theories about elemental particles can be tested. In 2012 the LHC was used to confirm the existence of the Higgs boson, the last non-observed particle in the Standard Model theory of particle physics.
In order to analyse data from the accelerator, a worldwide Computing Grid (W-LCG) was implemented. This infrastructure harnesses the capacities of scientific computing centres across Europe, America and Asia.
The CC-IN2P3 is one of 14 centres worldwide for first-level processing of LHC data and one of only four centres responsible for supplying storage and computing capacity for all four experiments fitted on the accelerator.
More information

Matters consists of molecules, which are made up of atoms. These are comprised of a central nucleus surrounded by an electronic cloud. Nuclear physics is the science that investigates the structure of the nucleus and all of the physical phenomena that involve it (fission, fusion, diffusion, radioactivity, etc.). It has various fields of application, including astrophysics, medicine (MRI, radiology, radiotherapy, etc.) and energy production. 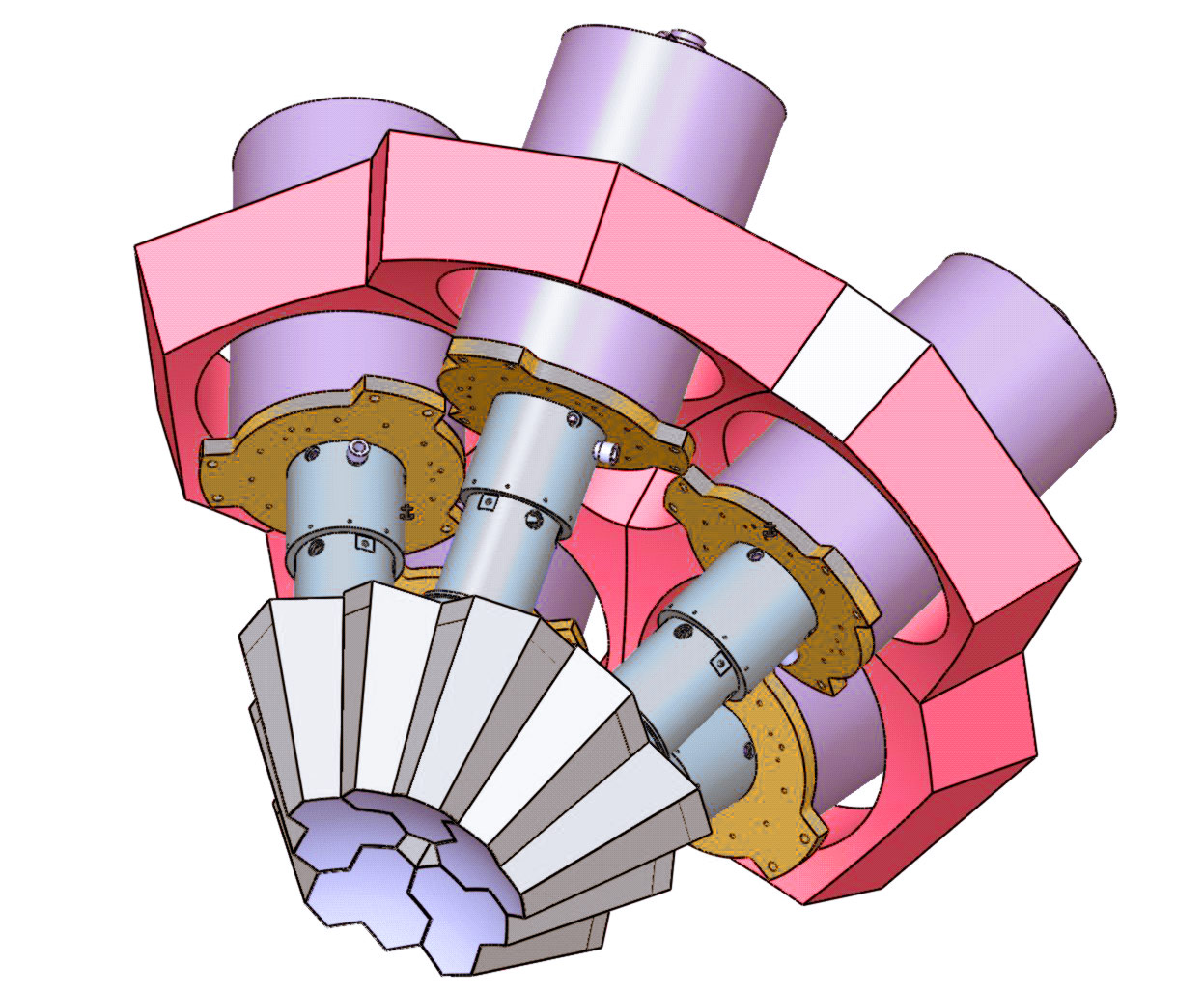 The aim of the AGATA project is to build a 4Pi gamma-ray spectrometer solely from Germanium detectors. These multi-segmented detectors are sensitive to the position of gamma ray interaction and, therefore, can be used to form complete tracking, which is a new concept in spectroscopy. This newest spectrometer offers unmatched efficiency and sensitivity and is suited to the extreme conditions created by the latest generation of stable and radioactive ion accelerators, making it possible to study the atomic structure of nuclei up to the limits of their stability.
More information 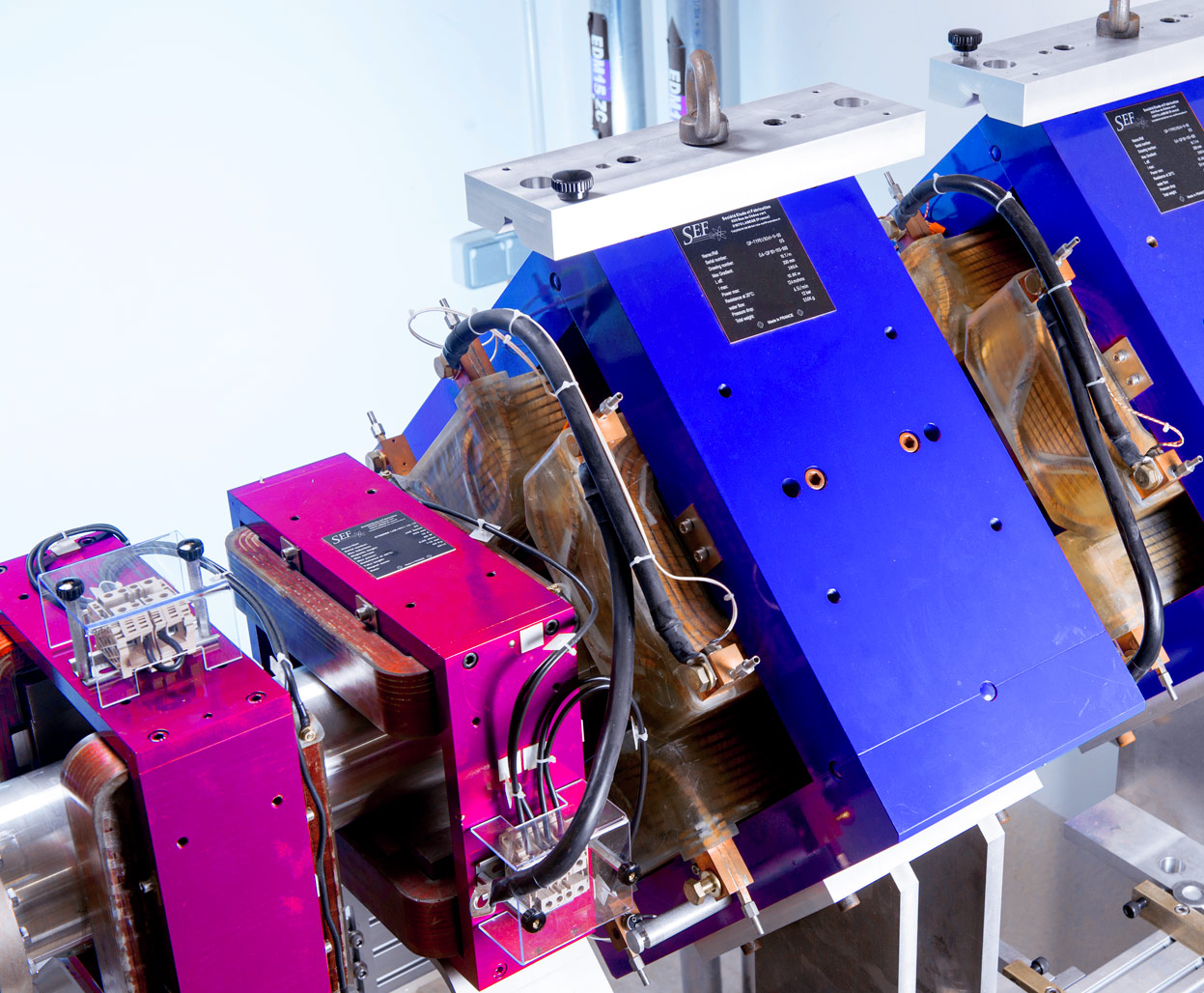 SPIRAL2 (2nd generation Production System of Online Radioactive Ions) is a linear particle accelerator project for studying fundamental nuclear physics and interdisciplinary research. The facility is as big as GANIL’s original installation and will produce beams like no other in the world.
More information

Astroparticle physics, which is also called particle astrophysics, is the discipline where particle physics overlaps with astronomy and cosmology. It aims to understand the universe as a whole: on all scales (from neutrinos to galaxies), its components (stars, black holes, dark matter, etc.), the interactions between these phenomena (celestial mechanics, gravitational waves, etc.) and their role in cosmic evolution, and its history (Big Bang, expansion and so forth). 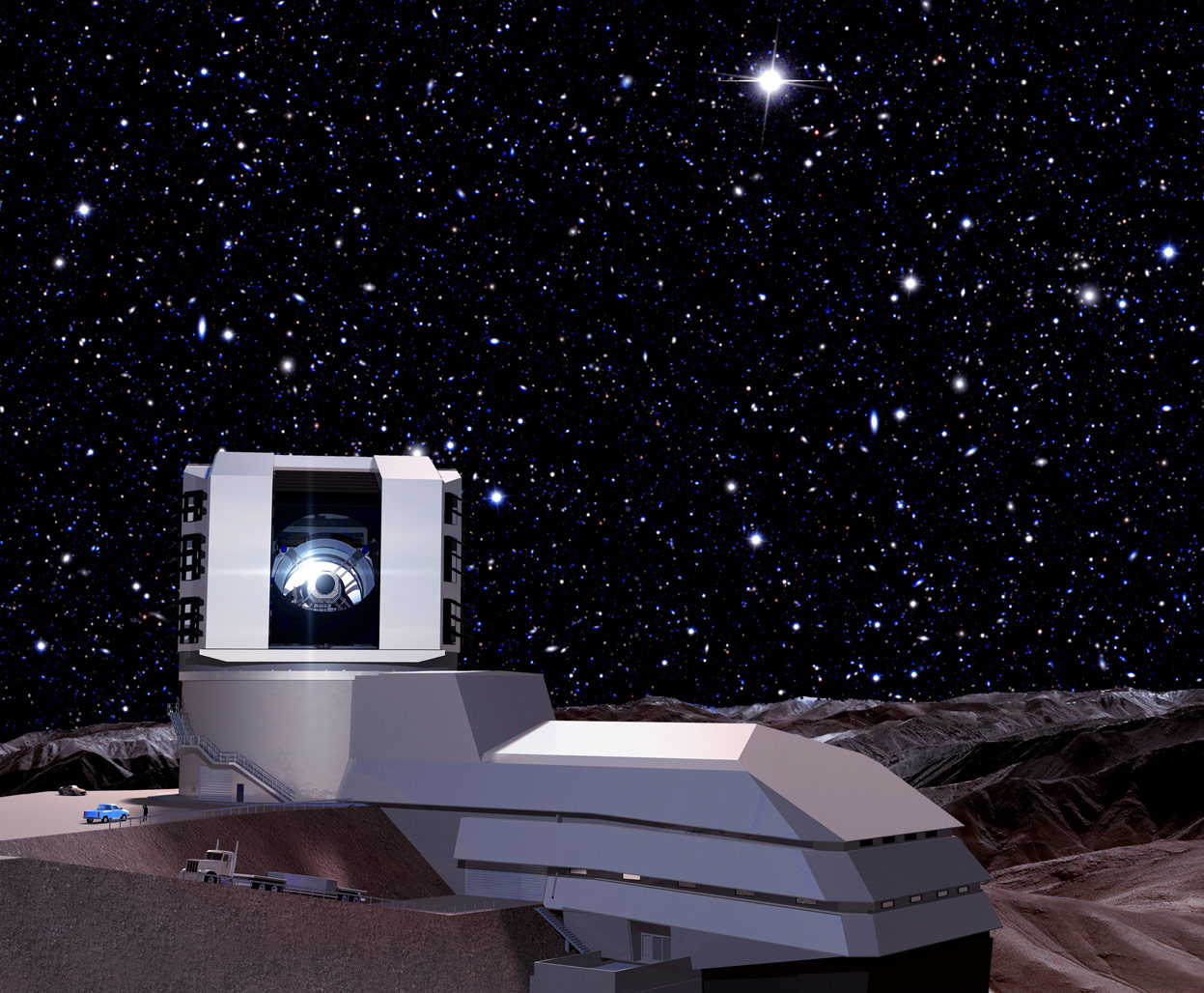 Located in Chile, the Large Synoptic Survey Telescope (LSST) is a telescope with a diameter of 8.4 metres and fitted with a 3.2 gigapixel camera. From 2022 the telescope will begin a systematic photographic survey of the sky lasting 10 years: every portion of the sky will be reviewed every four nights, thereby creating a three-dimensional film of the part of the universe visible from the site. One of the goals of this observation is to measure, with unrivalled precision, the physical quantities related to dark energy, which tends to accelerate the expansion of the universe.
More information

Cosmology is a branch of astrophysics that studies the origin, nature, structure and evolution of the universe. It is not concerned with cosmic objects, rather it investigates the laws that govern these objects. Cosmology seeks to gather all knowledge about the universe into a coherent whole. 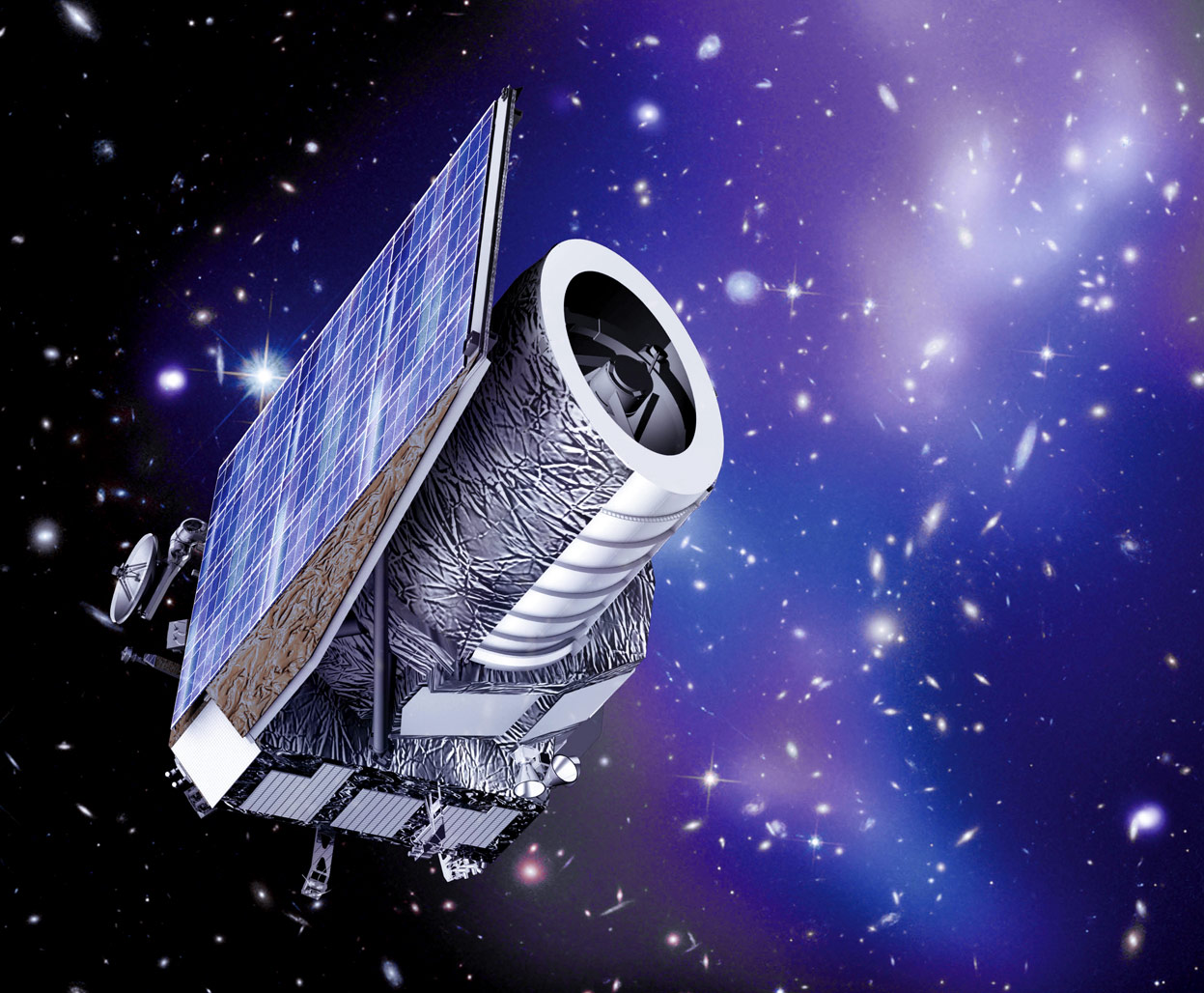 In 2020, Euclid, the European satellite, will leave Earth to embark on an extraordinary mission: to map a whole chunk of the universe in order to understand why the expansion of the universe is accelerating and the kind of dark energy responsible for this inflation.
Euclid is a space telescope with an instrument for visible light and infrared rays. During its mission, which will last at least 6 years, it will measure the gravitational lensing of more than a billion galaxies and the way in which these are distributed through space. These measurements are expected to make it possible to gain an understanding of the characteristics of dark energy.
No fewer than 10 French laboratories are involved in this experiment.
More information 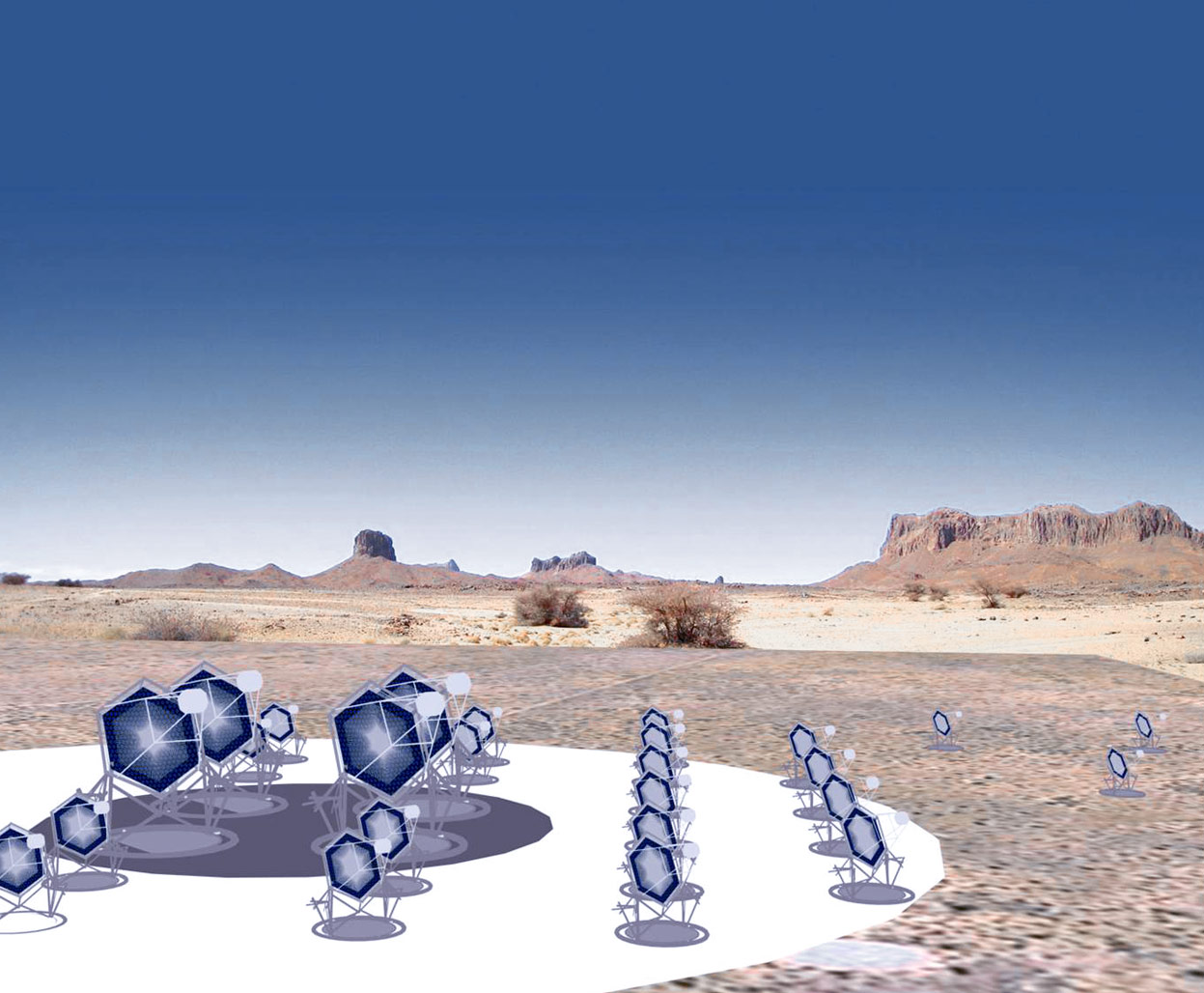 CTA, (‘Cherenkov Telescope Array’) is the European project of a large network of new generation Cherenkov telescopes for gamma ray astronomy at very-high energies.
The current generation of Cherenkov telescopes, such as H.E.S.S., opened up ground-based gamma ray astronomy for energy above a few dozen GeV. The next project, CTA, facilitates in-depth gamma ray exploration of our universe at very-high energies and full investigation into the non-thermal cosmic processes at work.
More information